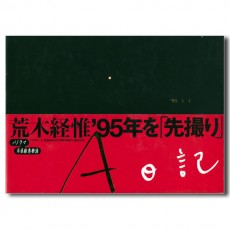 The shelves here at Japan Exposures are literally crashing to the ground under the weight of all the various books we have. (Note to any budding photo book collectors — IKEA bookshelves will NOT cut it. Budget for quality bookshelving.) Given this situation, the Minister of Storage has started upping the volume on the perennial question (and I quote), “Do you really need all these &%#@-ing photo books?”, and has issued strict orders to clear some space that our books are occupying in the living room, the bedroom, the children’s room, the toilet, well you get the idea.

So, taking a page from Japan Exposures Exotica, where we sell different cameras and such that we pick up here and there, we’re going to start doing something similar with books. On a regular basis we’ll be putting up a book or two in the store. These books will be — as the saying goes — priced to sell. Think of them as “real books for real people at real prices” or something like that.

We’re starting off with one of Nobuyoshi Araki’s 450 (or whatever it’s up to now) photo books, published in 1995 and in very nice condition, the obi intact, etc.

Description
A diaristic record of 1995, in chronological order — or so you would think (more on that in a moment). Photos are in panoramic format, and all are taken with date imprinting. Most pages feature two photos on a page, so this book is jam-packed with candid photos from just about every day of the year. All photos are in color, and every page is full bleed. Robert Frank and Nan Goldin put in appearances, as does Araki himself. And many, many models. Many of those models are, surprise, naked, but this is not one of those books. There is a short essay — Japanese only — by someone with the last name of Ito at the back of the book.

The book was published in March of 1995, leading quickly to the WTF? realization that your looking at a record of 1995 that was published at the beginning of 1995. The essay in the back explains that from 1981 to 1995, using a camera that had a date imprinting back, Araki would play with the dial while shooting, so that pictures even on the same roll might have wildly varying dates imprinted on them. (In his first book to feature photos with date imprinting, Pseudo Diary (1980), Araki used dates like April 1 (April Fools Day) and August 6 and 9 (the days the bombs were dropped on Hiroshima and Nagasaki, respectively) to highlight the pseudo-ness of the diary.)

According to the book’s essay, from the massive collection of date-imprinted photos, Araki and his editors assembled a seemingly chronological record of 1995, and that is what A Diary is. To be perfectly honest, it’s a great story but we’re not buying it. It has an apocryphal — or April Fools — ring to it. Was there a panoramic camera with date imprinting in the early 80’s?. We think it’s more likely the book was shot in 1994 — after all, that’s when Goldin was in Japan working on Tokyo Love, Spring Fever 1994 with Araki — with the concept already decided upon.

This is not a much so

ught after or rare Araki, as far as we know, so no need to rush to the Buy Now button just for collecting’s sake. And if you are more into the not-safe-for-work Araki, you may be disappointed. Nevertheless, we like it because it seems to have the right balance of “take a picture of anything that moves” and Sentimental Journey intimacy. We’re selling it because it’s chunky and stylistically overlaps other Araki books we have.

Condition
Some surface scratches and wear to obi and dust jacket, but very minimal.

Valuation
Haven’t searched this one on the web recently, but when I did I saw one copy for $80, and another for $350 (admittedly that one is signed, but still…).