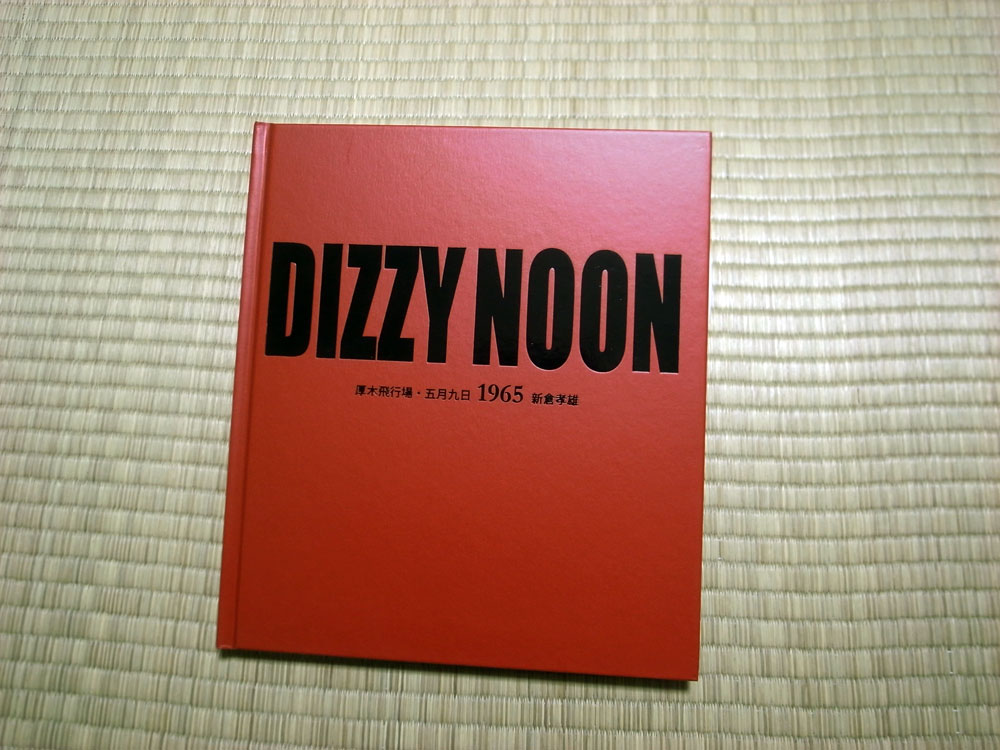 Reflecting on an special event held on a Sunday in the mid 1960s photographer Takao Niikura writes in the afterword of his book Dizzy Noon that:

“This was a chance to enter into the “other world” just for a day, a world surrounded by a two-meter, twenty centimeter tall barbed wire fence. I grasped my camera, together with seven or eight rolls of color film, which in those days was still something of a rarity, and set out.” 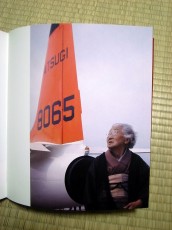 The world which Niikura was allowed to entered that spring day was the US Naval Air Facility Atsugi, an hour southwest of Tokyo. An airdrome built in 1938 to serve as base for fighter aircraft tasked with defending Tokyo from American bombers, it was on this runway that General Douglas MacArthur first set foot on Japanese mainland after the end of hostilities. While many Japanese photographers spent the post-war era exploring the shadow of Americanization that crept over their homeland through a foreign military presence, Niikura’s slim and charming collection eschews broad emotional depth to simply focus in on the cross cultural happenings of one particular afternoon; “Friendship Day”, the annual open house and Airshow held on base at Atsugi on May 9th, 1965.

The book opens up directly and literally from the base gate. With one arm on the wheel of his pale blue Volkswagen beetle an American man in aviator sunglasses looks out the window while an MP looks off into the background. The Japanese national flag billows above. Once inside we’re treated to a strange land- Niikura spends a frame of a pre-war wooden building- possibly barracks or an administration building. One wonders if the beginnings of the short lived “Atsugi Revolt” in the days following the Japanese surrender were planned in one of these buildings. As Niikura makes his way deeper into the facility we’re consistently shown his interest in the kitschy oriental decor he encounters. A “traditional” Japanese style bridge spans an small and quite empty concrete pond in a grassy spot near a parking lot. Over a pay phone hangs a large watercolor of the Great Buddha in Kamakura while a sailor, with cigarette in hand, waits behind his comrade. Vivid red Shinto tore gates appear here and there in the backgrounds. 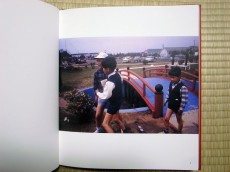 While Shomei Tomatsu may have been ironic or even malicious in his representation of foreign servicemen, Niikura captures his Americans with a sense of bemusement. Here we a smartly dressed officer caught in awkward pose- a sandwich in one hand with a camera around his neck. Later we discover a pot-bellied Army Sargent squinting ahead while his jeep sits covered in young Japanese children. In between all the soldiers and aircraft and Jeeps and tanks Niikura keeps a steady lens on his countrymen. Japanese fathers with wives and children, all dressed in their Sunday best, cooly meander in and out of the frame. The youngest of the children obviously enjoy the chance to poke, prod, and climb on all the spotlessly clean military hardware. Little boys laugh as they sit on the wing of a jet trainer while on other pages young men snap photos with their Nikons. Visitors line up for a chance to walk through cargo plane. In one somewhat dark frame a very young brother and sister grasp the

“The message of this book is situated in the faces and bodies of the adult Japanese visitors in contrast to their American ‘guests’.”

propeller of a Boeing B-50, the upgraded version of the B-29, the very bomber which reduced much of urban Japan to smoldering ash twenty years before. Self assured, broad shouldered, and grinning, American men, women, and children drink 7-up and munch from bags of popcorn. 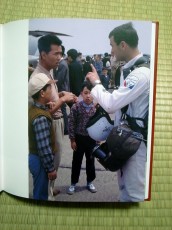 The message of this book is situated in the faces and bodies of the adult Japanese visitors in contrast to their American “guests”. Perhaps no image sums this up better than the one of a father interacting with an American pilot in his flight suit (“Rus” is written on his helmet). The pilot wields the leverage in the encounter with his index finger raised as to make a point. Certainly a language barrier was at work but the father, with his son’s arm hanging on his own, listens on with his hands drawn up before him. It’s by no means a confrontational scene but the contrast in confidence is marked by the body language shown. Page after page we see Japanese visitors with hands together, an expression of reservation? No one ever really looks comfortable, not when trying to order fifteen cent hamburgers at a window in English, and certainly not when partaking in a square dance with Americans in their Roy Rodgers Western Dress shirts. Younger Japanese women group together in threes and twos as they look apprehensively at the photographer. Indeed, the only young Japanese woman we find smiling is one arm in arm with her sailor boyfriend. Often we find Japanese men standing huddled together with arms crossed looking out at the spectacle before them. All the while brand new F-4 Phantoms, soon to see action in Vietnam, sit glistening off in the distance. 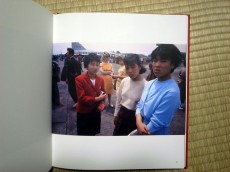 In the following 45 years Niikura went on to become a professional photographer and in 2010 published Dizzy Noon through Tokyo-based publisher, Sokyusha. A rather well put together little photobook, it is slim, with thirty six color images printed on a firm paper stock. It fits perfectly in your hands, just slightly taller than it is wide. The effectively simple layout respects the integrity of his 35mm frames with vertical images siting at the edge of the pages and horizontal ones centered. The book concludes with a thoughtful closing from the photographer in Japanese and English. 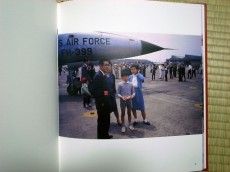 While enjoyable, this is a somewhat a peculiar book to find an audience for. Perhaps it is too particular to that single day it pictures to make much sense outside of its context to an international audience. On the other hand, it is charming and often entertaining. Maybe the best audience would be the Americans appearing in these photographs. I’d like to think that through the internet someone stationed at Atsugi in the mid 1960’s will come across this article and buy a copy. After all these years, they’ll be able to see how they and their home away from home appeared through a Japanese lens. I think they’d be interested in what they find.

Dizzy Noon is available in the Japan Exposures bookstore.