We’re going to start a new series of posts here on some of the photo books in our collection, the theme of which would be something like photographers you’ve probably never heard of before but should, or alternatively photo books you’ve probably never seen before but should. Sometimes those two themes might overlap. Without further ado, let’s begin with: 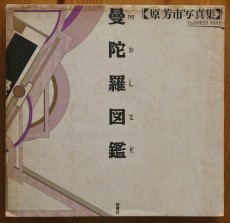 Yoshiichi Hara was born in 1948 in Tokyo. He attended the Chiyoda Photography Vocational School but dropped out. He first exhibited his photography in 1973. In 1978 he self-published his first book, Fubaika. Those are the basic facts and I have to admit I know little beyond them.

I do know that much of his book oeuvre has the word “stripper” in the title and he has published various “stripper guide” books. I have never looked at them beyond their covers (honest!), so I have no idea if these are straight commercial jobs or not, but their covers would seem to indicate they are. I had seen a couple of recent and decidedly non-commercial books of his at the Japanese publisher Sokyusha, but paid them very little mind for the longest time, sad to say. It was only after someone in Europe contacted me about purchasing some of Hara’s out-of-print books did I become intrigued to look a bit further. (You can find said recent books here and here.) 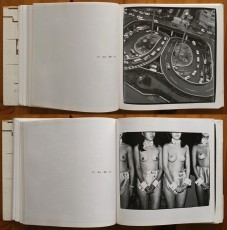 Mandala Zukan is a thick, square-shaped book, containing exactly 300 black and white photographs. Most of the photographs are in a square format, with “sloppy borders” to emphasize that we are seeing them full-frame, without cropping. They fill most of the right-hand page, giving them a sense of scale that is nicely counterweighted by the subject matter itself, which is rarely grand. On the left-hand page, there’s an almost completely empty page except for a simple caption denoting the number of the photograph, the city and district where the photograph was taken (in Japanese only), and the year the photo was taken.

The subject matter is all over the place, but never feels scattershot or give the impression that Hara doesn’t know what he’s doing. We always feel he is in control, that there is a vision he is trying to put forth but it is up to us to decide what that is. There are some images that might repel, and a few that could upset those with delicate sensibilities, but again one never gets the sense that Hara is shocking for shock’s sake. When I met Hara in person recently, he mentioned that the late Kiyoshi Suzuki was a friend of his, and that they had exhibited together. Like Suzuki’s books, Hara’s have that same feeling where the thread from photo to photo is often thin and hard to see, but always strong and firm. 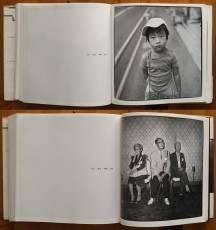 There are a lot of portraits, people posing for the camera a la those we find in Arbus or Suda, projecting a sense of self that can’t help but be undermined by the camera. Vulnerability is everywhere. There are more than a few children or young people scattered throughout the book, and by contrast they almost seem self-assured. One feels the urge to protect them, shield them from the harsh world of the main of the book — but not to protect them, but to prop ourselves up, give ourselves some hope.

The book’s design plays off the contrasts between a formal, clear-cut structure (one caption page/one photo, exactly 300 photos) and the vague, polyphonic subject matter, the candid, messy nature of the photos. The cover presents a constructionist motif, yet the book’s spine has the title angling over it in a diagonal, and Hara has handwritten his name and the letters that correspond to the Chinese characters. As well, one appreciates the little touches like different colored end papers, or small snippets of what seems like Hara’s diary randomly printed on the inside fold of the dustcover.

More importantly, the book is very well edited, and it’s obvious great care has been placed on how the images are sequenced, how they might resonate off of each other. A visual motif we subconsciously took in in one photo, might come back to the fore via another photograph several pages later. If there are occasionally visual puns, they are subtle, and don’t pull us out of our reverie.

What follows is a short (and silent) slide show that I hope will give you an idea of the book even as it can never really be more than that. (To view the video larger, click on the “Vimeo” mark in the bottom right hand corner of the video.) This is a book whose weight, physically (for a softcover book, it is quite heavy at over 600 pages) and of course emotionally, needs to be experienced in full, first hand. Reasonably priced used copies do come up once in a while — if you would like us to try to obtain a copy for you, please get in touch.